The US firm has announced two timepieces – one targeted at each sex – powered by Google’s Android Wear.

Samsung, Nixon and Fossil have also revealed new software-powered models at the Baselworld trade show. Swatch’s Tissot brand unveiled its first “connected watch” too, which links up to smartphones but does not run apps.

The launches coincide with a decline in traditional watch sales.

The Federation of the Swiss Watch Industry recently reported a “steep decline” in revenues, with January’s 1.5bn Swiss francs ($1.6bn; £1.1bn) representing an 8% drop on the same month’s sales in 2015.

The business group has blamed a “troubled economic situation” for the fall. 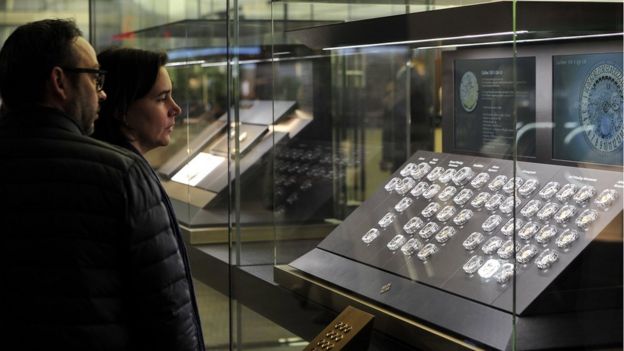 “Many consumers are still not sure how a smartwatch will benefit them in terms of lifestyle and practicality,” said its report, timed to coincide with the event in Basel.

“[But] ongoing advancements by the integrated chip manufacturers means they can go smaller – which opens up the market for more petite, women’s watches, effectively increasing their total available market.”

Smartwatch manufacturers that use Google’s Android Wear have limited ability to customise the operating system’s features, so much of their efforts are focused instead on design.

Michael Kors – whose devices are manufactured by Fossil – focused on their exclusive digital watchfaces and “glamorous style” at its launch rather than on technical specifications.

Fossil also unveiled two new smartwatches under its own brand – the Fossil Q Wander and Q Marshal – which it said were slimmer than its first-generation models.

California-based Nixon, however, had one trick up its sleeve for its first Android Wear watch – the Mission. It is water-resistant to 100m (328ft) – a record for the category – and still able to accept voice commands.

That allows Nixon to target the device at surfers, who need that level of protection because of the force with which they sometimes hit the waves.

Tissot has taken a different approach with its Smart-Touch.

The watch links up to a smartphone via Bluetooth when commanded to do so and can then provide navigation directions by moving its hands.

In addition, it can use the phone to synchronise itself to the local time zone.

The watch can also trigger an alarm on a fob, with which it is sold, in order to find mislaid keys.

Another unusual feature is a solar panel – used to recharge its battery, which is said to last up to a year before it needs to be swapped out.

“Swatch Group is the only Swiss watchmaker able to do a smartwatch on its own,” boasted the firm’s chief executive Francois Thiebaud.

But one attendee had doubts about its chances.

“It’s difficult to see how Tissot can scale this to deliver the breadth of functionality that an open platform like Android or Tizen can offer,” said Ben Wood from the CCS Insight consultancy.

“Swatch’s only chance for success would be to bring this functionality to its wider range of watches.”

Elsewhere at the show, Samsung revealed a tie-up with the jeweller de Grisogono to release a “limited edition” version of its Gear 2 watch.

The Tizen-powered device distinguishes itself from the standard edition by featuring more than 100 black-and-white diamonds. Its price has yet to be announced.

LVMH’s watch chief also provided an update on its Android-based Tag Heuer Connected watch, which was launched in November.

At a press conference, Jean-Claude Biver said that 20,000 units had been sold so far and that his firm planned to manufacture a further 60,000 before the year’s end.

“We totally underestimated demand, we were too cautious,” he said.

“Next year, we’ll have a real collection, a new version with six to eight models.”

US manufacturer Movado has also announced plans to make more devices as part of a partnership with HP, following 2015’s launch of the Movado Bold Motion.

Despite all the activity, one expert said it was important not to overstate the sector’s impact.

“I don’t believe smartwatches have affected the high-end watch market in any appreciable way,” said Ariel Adams, editor of A Blog to Watch.

“Although, I have heard anecdotally from brands that lower-end watches – $1,000 (£691) and under – are becoming affected.

“This Baselworld is all about partnerships, fashion and what I call brand cross-pollination,” he added.

“It’s mostly a marketing play, and I cannot find any brands here that speak fluently as to what people actually do with smartwatches and why people would want one.”

Apple – which is thought to be the world’s bestselling smartwatch-maker – is not exhibiting at Baselworld.

However, the firm has a press event on Monday in California where it may make related announcements.

Contact us today and make 2019 a year to grow your customer base.